The unofficial pasta of our national effort to be better listeners

Orecchiette, if you don’t already know them, are pasta shaped like little ears. Given that good listening is clearly a key to a better future for all of us, it seems like an opportune time to put orecchiette out front and feature them here. Orecchiette pasta are the most prestigious pasta of Puglia, but they’re also found in much of Southern Italy. They’re made by slicing off small circles of pasta, pressing them with your thumb, and rolling them back off to leave a roughly one-inch wide, flying saucer-shaped pasta. Brad Hedeman, now of Mail Order, then a young man working on the retail floor of the Deli reminded me: “I still remember you handing me the package of the Orecchiette and saying: “See the pasta? See the thumb print? There’s simply no way to make this by machine and the thumb print proves it’s handmade!” The indentations catch the sauce, while the rims of the orecchiette—a bit thicker than the depressed centers—stays firmer when you cook them, creating an interesting textural contrast as you eat. 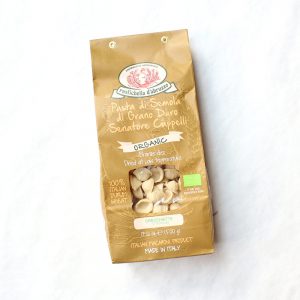 The orecchiette we have in right now come from the wonderful Peduzzi family who make them in their artisan Pastificio in the Abruzzo region on Italy’s east coast. The family has been at it since 1924. What we have at the Deli was made with an heirloom durum wheat variety called Senatore Cappelli. It was bred and selected in 1915 by agronomist Nazareno Strampelli and named for the Marchese Raffaele Cappelli who was from the same Abruzzo region in which Rustichella is located. It quickly became one of the leading wheat strains for Italian pasta makers for its solid yields and great flavor.

In 1924, when the Peduzzi family got going, Senatore Cappelli wheat would have been cutting edge—in the 1920s it accounted for nearly three quarters of the durum wheat grown in Italy. As with almost all the old varieties, flavor is higher, but yields are low, and the wheat is difficult to grow. Today it’s a tiny part of Italian wheat production. Senatore Cappelli is an autumnal variety, and it’s ideal for organic farming like this due to its considerable height, which can reach 4 feet. The resulting semolina from the Senatore Cappelli has a bright amberish, yellow color and so does the pasta that’s made from it. The pasta has a subtle sweet, malty flavor and pleasing supple texture.

The most common Pugliese way to eat orecchiette is with rapini, or broccoli rabe, in a simple sauce spiced with hot pepperoncini and anchovy. There’s plenty of rapini and also turnip greens (along with the turnips) at the Farmer’s Market right now. It’s also common as I made them the other evening (on election night actually) with tomato sauce. In the Abruzzo it’s more likely they’d have added meat but in the spirit of meatlessness, I used only tomato sauce. To make the dish, cook the orecchiette in plenty of well salted water until they’re nearly al dente. Meanwhile, heat the sauce. (If you want ground meat in it, salt, pepper, and brown it first, then add the sauce to the pan.) Pull out a bit of the pasta water out and hold it on the side to add to the sauce later. When the orecchiette are almost done, drain and add them to the sauce. Cook for a couple of minutes so the sauce is absorbed into the pasta. Add a touch of the cooking water—the starch in the water helps bind the sauce. I like to add a lot of black pepper or some red pepper to the sauce along with a bit of extra virgin olive oil. If you like cheese, add grated pecorino (or Parmigiano if you want) to the sauce. If you like less, just add a smaller bit grated on the top of each bowl. I serve it with fresh ricotta on the side.

Many years ago, I had the pleasure and honor of being on an Oldways culinary trip to Puglia with the late Andy Balducci, the man behind the amazing New York institution Balducci’s. We’d passed each other running in the park one day he suggested we go together. He was a lot older than I was, so we were moving very slowly (probably the pace I go at now), but it was really all about the conversation, not the cardio. At the time it felt a bit like I had gotten to go running with one of the Beatles. Somehow orecchiette came up. Andy, l learned quickly, loved them. Eyes smiling, he said:

The kind of orecchiette you make, that shows what kind of person you are. It’s not right or wrong. It’s just the way you are. If you’re heavy or light in your personality or . . . you know . . . the pasta shows you what kind of person you are. Orecchiette, that’s what you had to have on a Sunday, or, you know, for a festa [a holiday]. My grandmother would get up early, 5:30 or whatever and start cooking. Everybody came over. You’d have some of my grandfather’s home-made wine. Maybe some finocchio pinzimonio [fresh fennel dipped in olive oil]. Then you’d have your orecchiette with tomato sauce. Then we’d have the braciola [braised rolled beef]. And then for the dessert we’d have orecchiette again—they would take some fresh ricotta, add a few spoonfuls of hot water so it would get creamy, and then that was your sauce. You’d put that on your orecchiette, sprinkle some sugar on top. And that was your dessert.