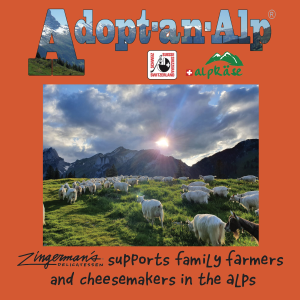 We’re bringing you Parpan Alpkäse cheese as part of the Adopt and Alp effort.  Each year since 2015, Zingerman’s Delicatessen has helped support the family farmers and cheesemakers in the Alps of Switzerland through our Adopt An Alp effort. We import different Alpage cheeses–each with a special story about the lifestyle, traditions, people and animals who seasonally move around the Alps to make these incredible cheeses. We invite you to learn, buy, and enjoy these cheeses with us! 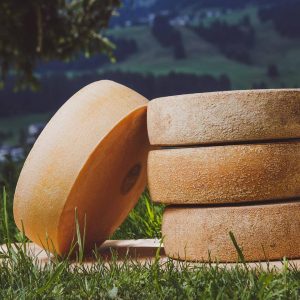 Parpan is a small village in the Churwalden valley in the Canton Grison. It is well known for its alpine skiing and it is also the area where 1976 giant slalom Olympic champion Heini Hemmi grew up. Alp Parpan is operated by a co-op of three farmers and by the Plantahof agricultural education center.

The operation covers four different Alp meadows, Stätz, Chötzenberg, Malix, and Plantahof. They are located at an altitude between 5000 and 6000 feet. 260 cows, 150 heifers, 150 pigs, and almost a 100 suckler cows and Galtkühe (dry cows who don’t give milk anymore) graze the pastures.

The dairy is located on Alp Plantahof above the village of Parpan.  A 100-year-old barn was turned into a modern showcase dairy in 2016. Although the barn is historic, the dairy installations are state-of-the-art and environmentally sensitive. Visitor can follow the whole cheesemaking process: from milk delivery to production to affinage.  They can also taste the cheese!

In 2020, Dario Burgener was hired as the new cheesemaker. During transhumance, he and his team produce about 23 tons of Parpan Alpkäse cheese. They also make fresh cheese, butter, yogurt, and whey drinks that are sold at the dairy.

How to try Parpan Alpkäse cheese

20 pounds of this cheese (2 10-pound wheels) arrived at the Deli in mid-October.  We will be selling this cheese from our Specialty Foods cheese case or online until it’s gone!

Learn about the other Alpage cheeses at the Deli