We offer three flavorful versions of paella on our patio, but only once a year! Learn more about this Spanish dish and see recipes

Paella (py•ay•a) is arguably Spain’s most well-known dish. It’s a satisfying one-pan meal of densely flavored rice, but what else gets added in beyond that is up for debate. Like many foods worthy of being passed down through generations, the history can get skewed over time. Luckily, we have a wealth of information from Ari Weinzweig, Zingerman’s co-founder and history major. (Psst, download our recipe booklet with a short history at the bottom of the post!)

The original Paella Valencia was believed to be made with rabbit, snails, beans and that signature pinch of precious golden saffron. Kind of like pizza in a way, paella additions can be specific to the region or season, and have evolved to the point nearly anything goes and everyone has their own version.

Every year, Zingerman’s Delicatessen offers three flavorful versions: shrimp and mussels, chicken and chorizo, and vegetarian. The vegetables selected are whatever is in season at the Ann Arbor farmer’s market, but often includes green beans, carrots, yellow squash and lots of fresh herbs. Hungry yet? Us too. But first, there’s more to the story.

It’s important to know these colorful pans of this tasty dish only appear at the deli a few days each year. So, you might want to mark your food calendar. You have one of those, don’t you? Our Paella Parties at Zingerman’s Deli, also known as the Fiesta de España, started back in 1985, just a few years after the gourmet food retailer opened its doors. Other than adding more dates to meet demand, nothing has changed about this high energy experience on the deli’s patio in more than three decades. That means it’s gotta be worth a visit. 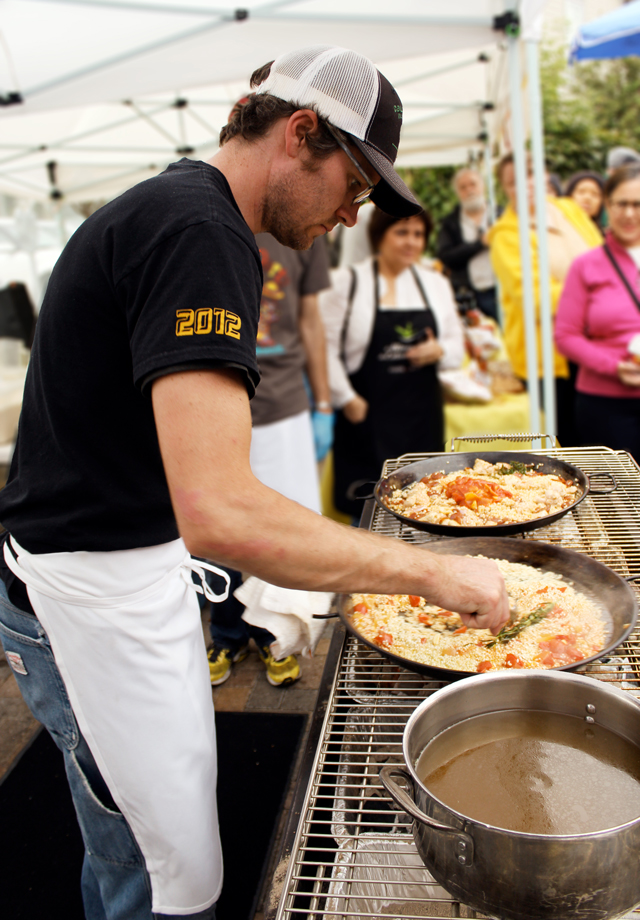 So what makes a good paella? According to Deli cooks it’s all about the pan and the rice. First, they choose a quality broad and shallow pan made specifically for cooking paella. Next, they opt for Calasparra rice, a Spanish medium grain also known as Bomba or Valencia rice. It’s a very absorbent variety that will soak up large amounts of the saffron broth during cooking, another key to paella success. The rice is available for sale at the Deli grocery and flies off our shelves!

On paella party weekends on the Deli patio, cooks start at 7 am preparing the ingredients and firing up the outdoor grills with mesquite charcoal. They get pretty skilled at the technique when making as many as nine pans of paella at a time, and anywhere from 30 to 50 pans of paella each weekend. You’re invited to watch the action at a live cooking demonstration on the Deli patio at noon on paella party days to give you the inspiration to make one at home. Plus, you can even be a guest chef!

Deli chef and managing partner, Rodger Bowser, has been cooking paella for more than twenty years. So, what does he look forward to most about the annual Paella Party?

“I love working with staff outside over the grill teaching them the techniques, meeting the guests who stop by for a plate, and eventually sitting down to eat a pan with my wife. Even after cooking it all day, I still like eating it.”

While you’re at the Deli don’t miss the other specials including Valencian horchata, a chilled spiced drink made with tiger nuts and Spanish desserts from Zingerman’s Bakehouse. There’s the Torta di Santiago, a little toasted almond cake and chocolate Miguelitos, a puff pastry and chocolate cinnamon cream sandwich, both which are event exclusives.

Don’t miss your chance to enjoy this fun Ann Arbor tradition! See you on the patio!

Preorder A Pan And More!