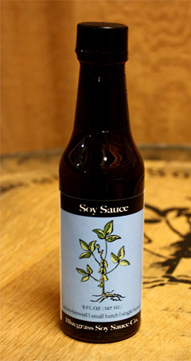 Making soy sauce at home is a long drawn out process. I should know–my grandmother hung homemade soy blocks for fermenting from her ceiling facing the courtyard in her old house and she and my mother made miso and soy sauce from scratch. The whole process takes from winter to spring but it sure did taste good.

But I am an American grown daughter. I have not used a homemade soy sauce since childhood. And with soy beans being one of the most genetically modified crops here, I would not even know where to buy high quality soy beans, the most fundamental ingredient. For convenience sake, I had mostly been using a store bought soy sauce from a Japanese corporation that shall remain nameless. Like most grocery-bought soy sauces out there, it tastes like dark salt water and not even great tasting salt water at that. Walking into an Asian grocery store to find a good bottle of soy sauce when you do not speak a common language can be intimidating, too.

So when I read a New York Times article about American made artisanal soy sauce , I was curious, even skeptical. All the buzz words were there–non-genetically modified soybeans from a local farmer, organic wheat, filtered spring water–but does it taste good? What is this business with aging it in bourbon barrels? I had to taste it. I tasted it next to mass produced soy sauces as well as others marketed as organic and/or artisanal. The flavor is brothy, savory and meaty with just a hint of wood. It’s quite lovely. Is it the best soy sauce out there? No, that title belongs to my grandmother, but this one is a good substitute.

I will be straight with you and tell you that I will not be using this to marinate 5lbs of barbeque ribs as I am known to do. I use it sparingly, simply and savor it. My favorite way to use Bluegrass soy sauce: make a fresh bowl of rice, top it with an over-easy fried egg, a pat of good butter and drizzle it with the soy sauce. Easy. Delicious. Perfect.